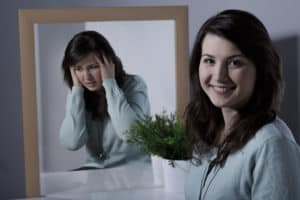 Recognizing The Signs That You’re Coping with a Mood Disorder

Mood disorders are a more prevalent health concern than many people may realize. Approximately 26% of American adults in any given year suffer from a diagnosable mental disorder. With a significant portion of the U.S. being affected by mood disorders and other mental health concerns, it’s important to know the signs that you’re coping with one.

Mood disorders are a type of mental health condition that mainly impacts a person’s emotions. With this disorder, individuals may experience extended periods of extreme emotions, whether that be sadness, happiness, or a combination of the two. Someone with a mood disorder may experience fluctuating levels of depression, apathy, anxiety, and irritability. Depression and bipolar disorder are among the most common mood disorders.

These are only two of the many mood disorders that people can experience. Other known  disorders include substance-induced disorders, premenstrual dysphoric disorder, and intermittent explosive disorder.

Signs That You May Have a Mood Disorder

Common signs that you may be suffering include:

The only way to definitively know that you have a mood disorder is to schedule an appointment with a mental health professional for a diagnosis.

Understanding the Difference Between Bipolar and Depression

High Blood Pressure: 7 Steps You Can Take That Could Save Your Life

COVID or Strep Throat: How to Tell the Difference?